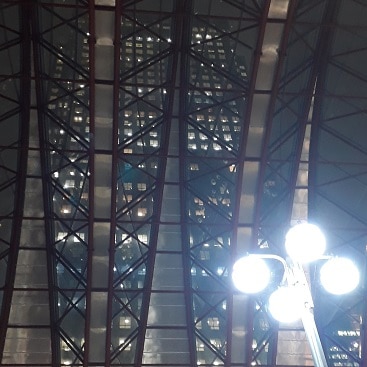 Last week was weird for me, because rather than being at home as a family of four, I was whisked off to London for work.

One thing stayed the same – I still did a quick meal plan.

For anyone trying to make the most of their money, meal planning can slash your food costs. Jotting down a list of meals helps me use up food I already have, so I only buy the extras needed to make it into meals. By checking the family calendar, I can make sure I don’t fill the fridge on a week when we’ll all be out, and include quick meals to eat before Cubs or other clubs. Plus if I buy the food in one trip, it cuts down on top up shops that can turn expensive.

However, planning meals for a week away was a whole different ball game.

For a start, I only had to cook for myself, and not for the whole family. I was staying in a serviced apartment with a kitchen, rather than an apartment, but still didn’t know exactly what equipment I’d have. I wouldn’t have access to all the food I normally have at home, so would have to start from scratch. Usually, I cut food costs by buying bigger quantities, with a lower cost per kilo. But if you buy a big pack for a few days away, you either get bored eating the same thing every day, or have loads left at the end, or both.

Meal plan for a week working away

In the end I jotted down a list of meals based on a combination of food I could take, and buying a limited amount extra:

1 x couple of value range Weetabix with milk and banana

(all accompanied with some combination of fruit, yogurt, cucumber and carrot sticks)

Tips for meal planning for a week working away

Here’s a round up of my top tips:

Can’t start the day without a particular drink? Take some with you. I packed some of my trusty Earl Grey teabags. I also took food for specific recipes, if I already had it (like a red onion, a lemon and some white cabbage). I added small portions of stuff that comes in big boxes, to avoid buying more, such as a couple of Weetabix* to vary my breakfasts. (*When I say Weetabix, I mean Morrisons value range M Savers Wheat Biscuits, but it doesn’t exactly trip off the tongue)

No-one likes to return to rotting remains at the back of the fridge. Before leaving, I had a quick look to see which food might go over while I was away. I chucked out some of the worst offenders, then packed elderly veg for the meals I’d planned, plus some leftover braised red cabbage that would otherwise go off.

It’s only when you don’t have your normal store cupboard that you realise what a difference that pinch of chilli powder, dash of soy sauce or even sprinkle of pepper makes to your meals. Pouring olive oil into a small bottle, and taking the salt and pepper set from our picnic rucksack, helped make cooking more possible. A chunk of cheddar, small box of mayonnaise and couple of cloves of garlic all helped liven up my meals.

I also dug out a couple of Simply Cook spice sets from the back of the cupboard, bought long ago on a cut-price trial. They contained the flavours for two specific recipes, BBQ Tandoori Chicken and rice-based Bokkeumbap, so I planned meals around the recipe cards (check them out on the Simply Cook recipe page).

Brace yourself for limited equipment

I’m well aware that my definition of a “fully equipped” kitchen, and the definition by a self-catering apartment might not match. I usually measure out oats, milk and water when making porridge, so it doesn’t explode in the microwave. I was pretty sure the apartment wouldn’t stretch to digital scales, so I boxed up a few portions of porrridge oats, and packed a lightweight measuring jug. I also took along a small sharp knife and a grater.

Making packed lunches, rather than buying food out every day, can save a bomb. I took some cling film, a few sandwich bags and a packed lunch bag to help. A set of plastic boxes also made it easier to take leftovers for lunch. I took a set of three that fit into each other, to save space when packing. I also planned meals where I could cook once and eat twice, by taking leftovers for lunch the next day. (Post with more thrifty tips for packed lunches)

If you freeze food that you’d normally keep in a fridge, it helps survive the journey. I headed off with a pot of home-made butter from the freezer, to avoid buying more. Plus it tastes delicious and I might just be a bit obsessed. (Post on how to make butter)

I knew I would be eating out with friends for two or three of the five nights, so I only planned main meals for a few nights rather than all of them. I also planned meals that could be eaten at night, or taken as a packed lunch, like fried rice. In the end, work provided a couple of lunches too.

After a long day, takeaway or delivery food are seriously tempting if you’re too tired to cook. It’s easier to resist if you plan a meal that requires minimal effort instead. I took a small box of the bolognese sauce made for my family to eat while I was away, plus a portion of pasta.

Something as simple as a shopping list can save time and money. When jotting down my meal ideas, I also made a list of the stuff I still needed to buy, making it easier to run to the shops when I arrived late on Sunday.  I focused on fresh stuff and smaller quantities that would be used up during my stay, so things like milk, bread, yogurt, eggs and fresh fruit and veg.

Even with a shopping list, I still make swaps if I see better bargains while shopping. I’d meant to buy a wholemeal loaf, apples and green beans, but then found cheaper yellow-stickered seeded bread, wholemeal rolls, raspberries and broccoli instead.

Scope out the supermarkets

Before leaving, I looked online to find the nearest supermarkets. For the first night, there was a corner shop within sight of where I was staying – but I knew if I headed slightly further up the road, I’d find a cheaper Tesco Express.

Mid week, I fancied some treats, so I nipped out for a sugar-free soft drink and low cal Oppo ice cream I spotted on supermarket shopping apps. I spent £6.53 but will get all the money back as cashback from CheckoutSmart and Shopmium.

If you’re interested, here’s a pic of the food I took: 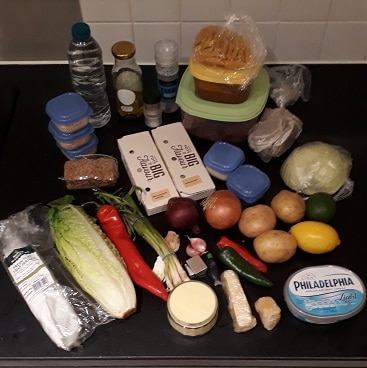 I also took some cooking equipment: 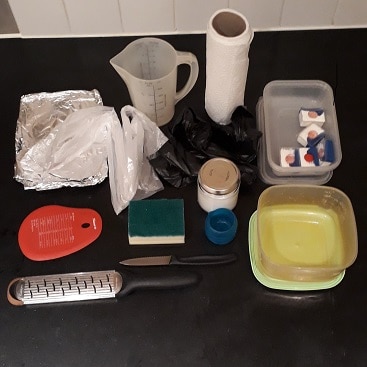 Plus a loo roll and some cling film, still in the suitcase

The three things I didn’t take but wish I had were a bit of washing up liquid (not just dishwasher tablets), a wooden spatula and a potato peeler. The ‘fully equipped’ kitchen had a garlic press, pizza wheel and even a potato masher, but no potato peeler, and nothing other than cutlery for shoving stuff round in pan.

I know this looks like a ridiculous amount of food and equipment, but it did all fit in this bag: 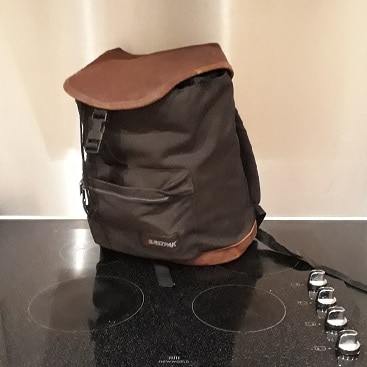 Here’s what I bought, on my quick shopping trip the first night I arrived: 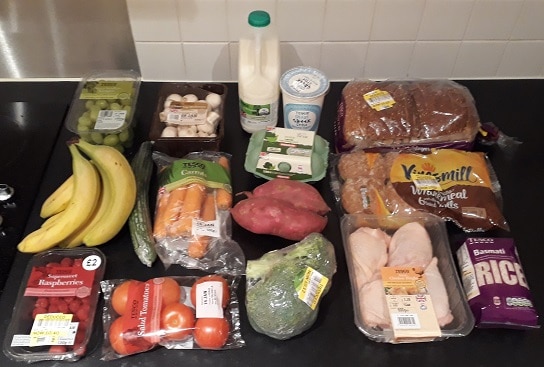 As you can see, I still couldn’t resist swooping on some yellow-stickered bargains. Total cost from the nearby Tesco Metro: £12.44.

Later in the week, I spent a couple of quid on marmalade, apples and cut-price chutney, plus separate supplies for a friend’s birthday meal round at her house.

In the end, just under £15 covered 12 meals, and I even had some leftovers to bring home.

Now over to you. How do you cut costs when catering for a week away? Do let me know in the comments, I’d love to hear!

I’m joining the meal planning linky hosted by Katy over at KatyKicker and Naomi from The Organised Life Project. 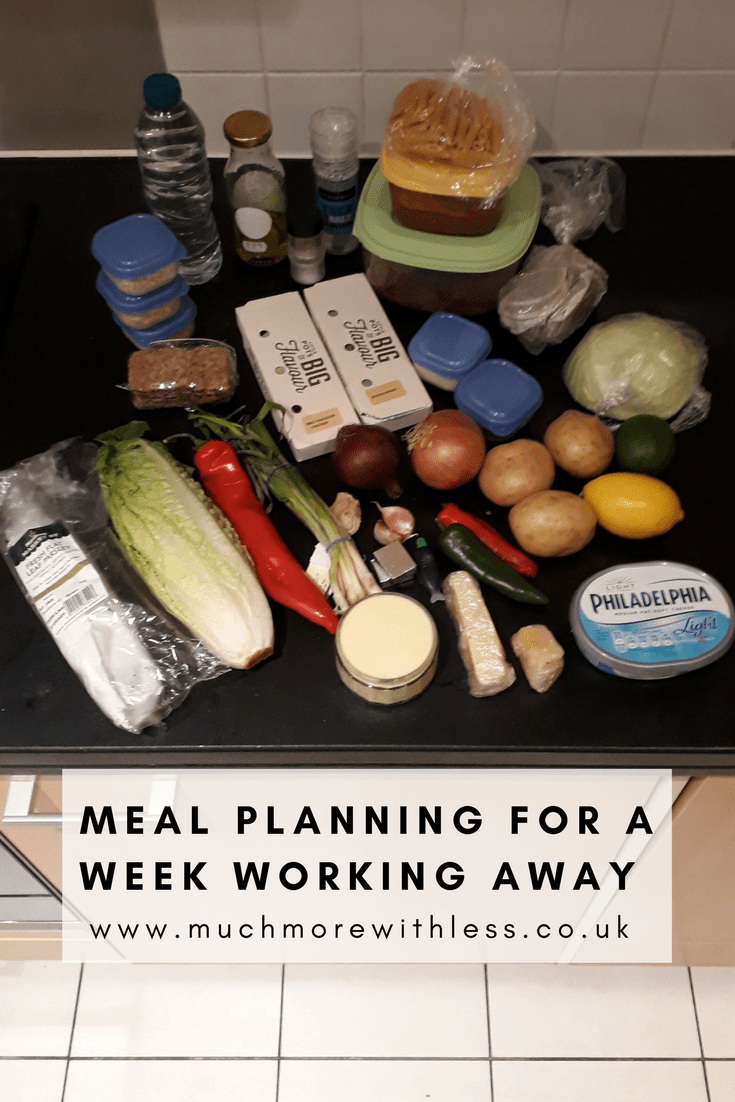