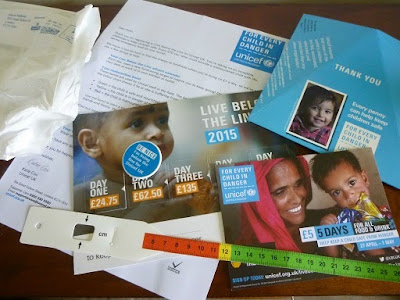 I nearly didn’t take part in Live Below the Line this year.

I’ve taken the challenge twice before, feeding myself on £1 a day for 5 days, raising funds and awareness to combat global poverty.

I wasn’t sure I could pester my friends and family yet again, urging them to donate to UNICEF, the world’s biggest children’s organisation. Everyone has their own pet causes – how could I ask them to divert their cash to my choice of charity?

I was actively concerned that as a participant in Live Below the Line I could be accused of hideous poverty tourism, patronising people on limited incomes from my position of privilege, and trivialising an immensely important issue.

Also, as I said in response to a very thought-provoking blog post by Miss South, a food blogger for whom I have immense admiration, I question how much I participate for my own benefit, at a time to suit myself, to a campaign that has very fundamentally changed my views on budgeting and cooking, food waste and inequality, and provided an outlet to talk about them all.

I saw the storm that greeted actress Gwyneth Paltrow’s attempts to live on the equivalent of SNAP, the American food stamp system, feeding her family for a week on $29.

However well-intentioned, her efforts were resented as bad taste, a stunt, a game. Better to make a substantial donation than play at poverty.

I am well aware that my efforts were entirely artificial. Unlike the 1.2 billion people living in extreme poverty, I have a roof over my head, clean water to drink, food to buy and the transport to fetch it, fuel to cook on and the time, skills and equipment to attempt feeding myself on a tiny budget.

Live Below the Line does not – cannot – attempt to replicate the reality of living in poverty. But it can give some glimpses into the soul-destroying struggle for so many to provide food for their families.

In the end, I clenched my teeth and took the Live Below the Line challenge for the third time. It seemed better to do something, however small, than nothing at all.

This year was harder than ever, as I only had £5 to spend not the relative luxury of £10 for two people. I planned, shopped and cooked, then blogged, emailed, tweeted and spammed the hell out of my Facebook friends.

Then the day after I started Live Below the Line, the earthquake struck Nepal.

With more than 8,000 people dead, many more injured and infrastructure destroyed, donating to UNICEF’s work in the aftermath suddenly became much more immediate rather than a theoretical good cause.

I have been incredibly touched by the response from people I contacted about my efforts on Live Below the Line, and not just when I was over-emotional on Day 4 with my blood sugar levels all over the place.

Donors to my fund-raising page come from the whole spectrum of my life – family, school, university, work, voluntary committees, the school gates, friends of friends, bloggers and even some complete strangers.

Thanks to their generosity, plus the fee for an article I was asked to write about my experiences on Live Below the Line for the Sunday Times, my fund-raising total has now passed beyond £1,000.

In the end, that’s more than a thousand reasons why I’m just going to have to take accusations of poverty tourism on the chin.

Live Below the Line never ceases to make me immensely grateful that for me, due to an accident of birth, feeding
myself on £1 a day is temporary.

But for nearly 20% of the global population, living in extreme poverty is their reality, every single day.

Please consider donating to UNICEF to support their much more worthwhile work keeping children worldwide
safe, fed and healthy, including their response to the earthquake in Nepal.