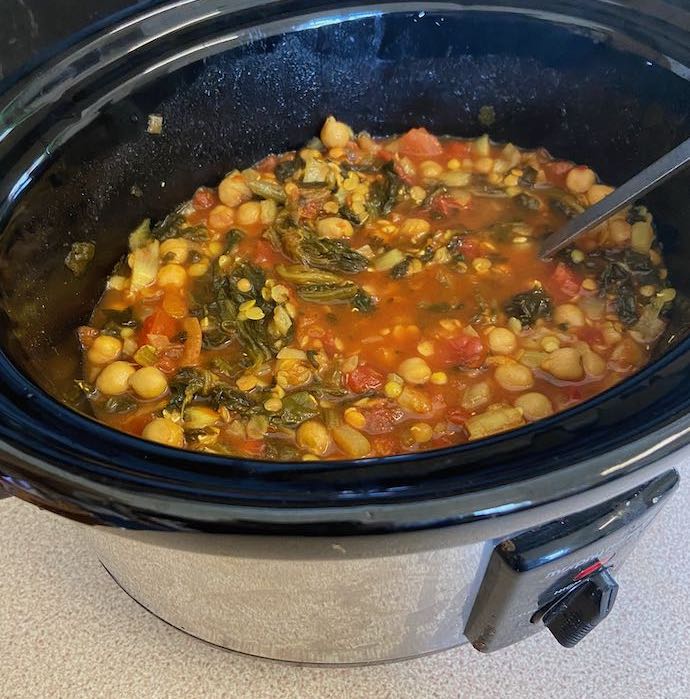 With gas and electricity bills shooting up, here are my quick tips to cut energy costs when cooking.

Wholesale gas prices have rocketed during the last year, making a slew of energy firms go bust. The energy price cap from October 1st went up a chunky 13%, and is likely to surge again next April. There aren’t even cheaper deals to switch to, which means many people coming off cheap fixes will end up paying way more.

I was particularly aware of energy costs when doing the State Pension challenge, trying to live on £179.60 for the week. I piled on the jumpers and resisted turning on the central heating. With a tight budget for food, I couldn’t eat out or rely on takeaways. I had to cook from scratch, while still trying to keep my energy bills down.

By reducing the amount of energy I use in the kitchen, I can therefore save money on my bills. Plus, it can help reduce damage to the environment.

Read on for my top tips to cut energy costs when cooking! 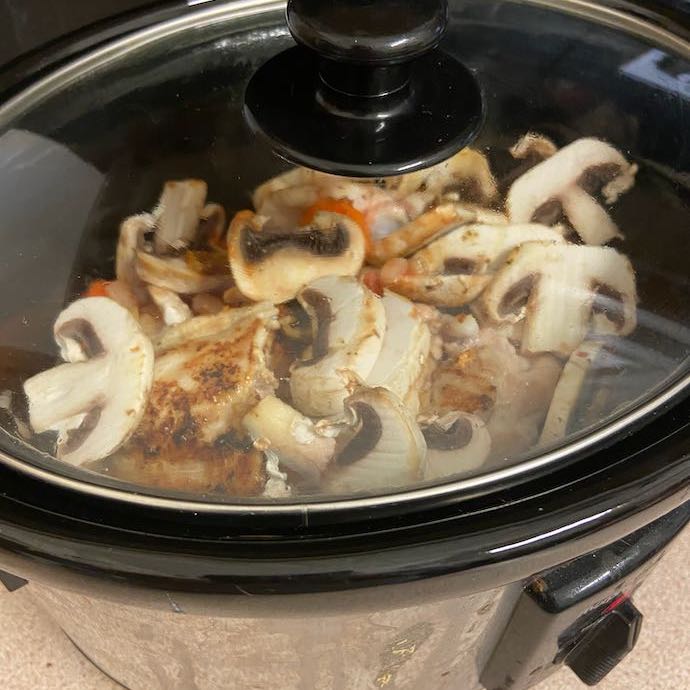 Switch to a slow cooker

Foods such as soups, stews, casseroles, chillies and curries can all help you keep warm in cold weather.

However, rather than firing up your hob or oven for hours, use a slow cooker instead. As I said in my November column for Woman&Home, using a fan assisted oven costs 46p an hour on average, compared with a tiny 3p an hour for a slow cooker, according to energy company Utilita.

Slow cookers also help make the most of cut price ingredients such as beans, pulses and cheap cuts of meat. Just remember to add less water than normal, as less evaporates in a slow cooker.

Put a lid on it

When you do use your hob, use saucepan lids. Heating something up? Put a lid on it. Cooking rice or pasta? Put a lid on it. That way, you’re not trying to heat up your whole kitchen. Choosing saucepans with glass lids helps keep an eye on the contents! 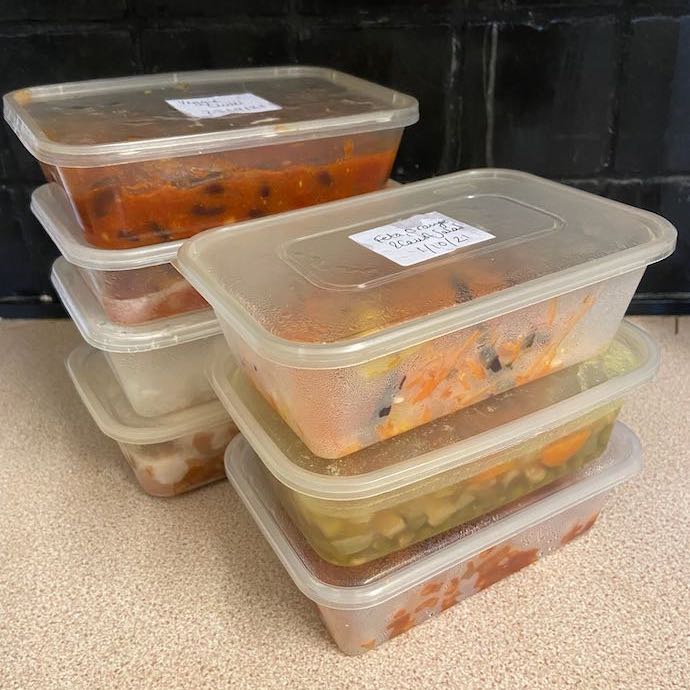 If you are going to cook something, think about whether you can make a large amount, to avoid cooking multiple times.

Even if you are cooking for one, you can divvy up portions to eat another time, creating your own home-made ready meals. Don’t fancy eating the same thing several days running? Bung some in the freezer.

Make the most of your microwave

Microwaves save energy because they only heat up the food itself, rather than the air around it. I use my microwave to zap portions from batch cooking, so I don’t have to use the hob. Just make sure your food is piping hot afterwards. 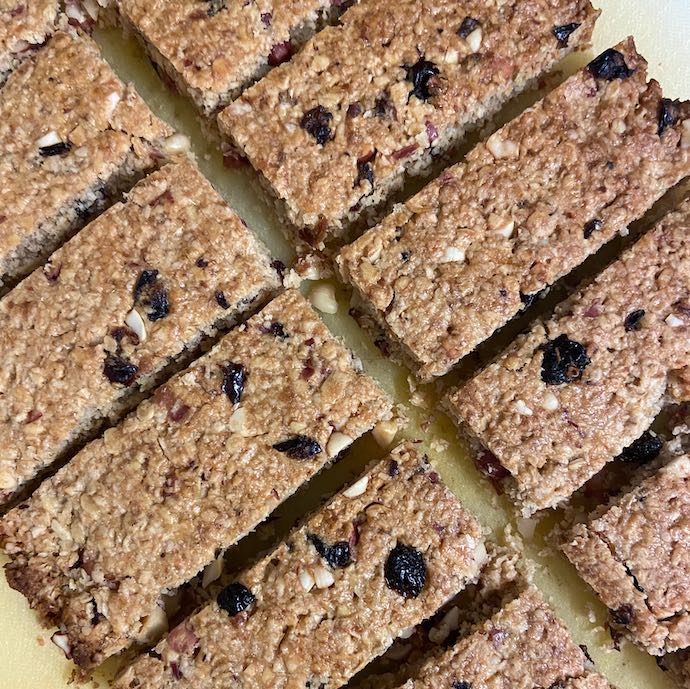 Needs must: bars made of oats, raisins, peanuts, butter & marmalade

Max out your oven

If I do use my oven, I try to cook several things at the same time, rather than using it for a single baked potato.

So during the State Pension Challenge, when I heated the oven up for a chicken thigh traybake, I also shoved in a tray of roasted veg for another couple of meals. If the kids have chicken nuggets or fishfingers, I pop in wedges or roast potatoes, to avoid using the hob for boiled potatoes, rice or mash. I also managed to squeeze in some slightly suspect oaty raisin bars (technical term).

Keep an eye on your kettle

Don’t get splash happy when filling your kettle. If you only want a cup of tea, just boil a cupful of water, rather than filling it to the brim. If you do end up with extra hot water, top up a thermos kept next to the kettle, to use for your next brew. 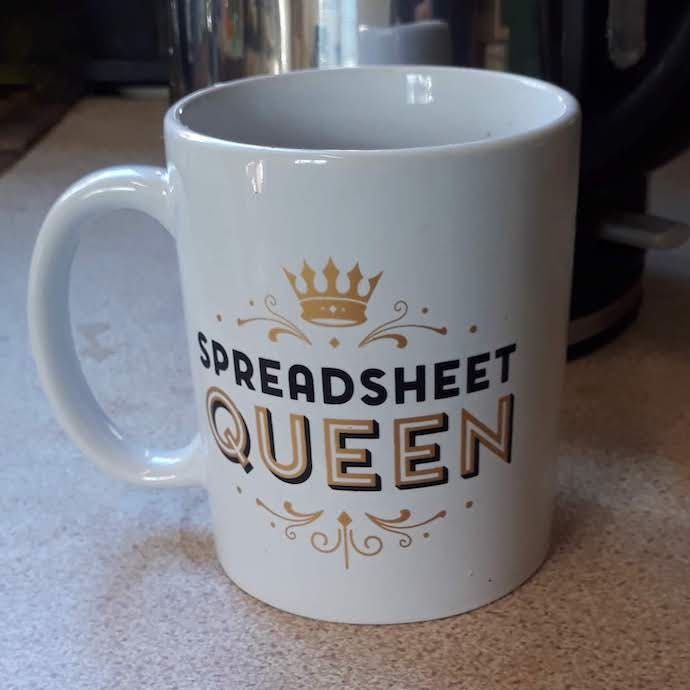 Making one cup of tea? Only boil a cupful of water

Yes, I can defrost stuff speedily in a microwave. But that costs money.

Instead, I try to think about the next day’s meals just before going to bed, so I can get food out of the freezer the night before. I can then put it in the fridge to defrost safely overnight, without affecting my energy bills.

Clean the back of your fridge and freezer (carefully!)

Ever pulled your fridge or freezer away from the wall?

The coils at the back are part of the condenser that keeps them cold. If the coils get dirty, they become less efficient, so it’s worth cleaning off the dust and dirt every once in a while.

If you have a freezer that needs defrosting, make sure you defrost it regularly rather than letting it get shaggy with ice. This will also help cut its energy consumption.

If you are stuck with replacing stuff like your fridge, dishwasher or cooker, check their energy labels and try to choose appliances with high energy efficiency ratings. They may well cost more to buy, but will then keep your running costs down.  Think ‘A’ ratings and lots of ++++.

Now – over to you. What are your top tips to cut energy costs when cooking? Do share in the comments – I reckon we could all do with making some savings.