Feels like I won the chicken lottery when shopping for Live Below the Line this year.

After struggling to balance a £10 budget to feed 2 people for 5 days last year, the actual shopping was much quicker this time, even though I still spent ages working out what on earth to buy.

I already knew Iceland was likely to sell the cheapest eggs, so it was my first stop the day before starting Live Below the Line, and boy did it turn up trumps.

Faced with spending £1 on either 6 free range eggs or 12 caged eggs, I sold any principles down the river and bought a dozen.

Canned chickpeas were a whole 2p cheaper than elsewhere at 35p, and Iceland also seemed to do the cheapest bags of onions, carrots and bananas, so I could use part of the contents for less than buying them individually. 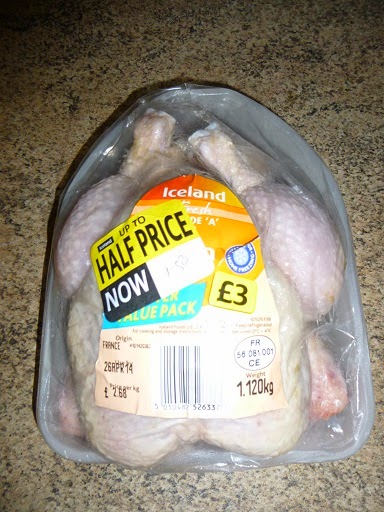 Chickentastic – £1.50 for the whole chicken

However, I nearly danced in the aisles when I discovered a chicken in the chiller cabinet reduced to half price at £1.50, rather than the £3 I’d expected. Suddenly visions of value tea bags, jam and fresh milk became a possibility.

I decided to blow a whole pound on a 900g bag of Iceland frozen mixed vegetables, over excited at this luxurious version which added sweetcorn and green beans to all the carrots and peas, rather than boring cauliflower in the cheapo 75p alternatives.

The local supermarket a few doors down sold garlic by weight (whole bulb for 11p, rather than 30p for a single bulb at Sainsburys/Tesco/ASDA), plus 19p for a lemon and the tiniest 70g tin of tomato puree for pizza topping at 29p.

The rest of the food specifically for Live Below the Line came from a late night trip to ASDA, driven entirely by the desire to buy Allinson Easy Bake Yeast at 28p for two 7g sachets. Everywhere else only seems to sell bigger packs for more money.

Otherwise, ASDA Smartprice food prices basically match the Tesco Value range for anything else I wanted to buy, and both are cheaper than Sainsbury’s Basics.

So I made a pilgrimage to the Stamford Hill ASDA, only to find they didn’t sell the 28p yeast sachets and the cheapest was 64p for 125g. Bugger.

There weren’t any Smartprice apples left, but I got a cheap bag of Braeburns instead (6 for £1, would need to work out later how many I can lever into the budget). 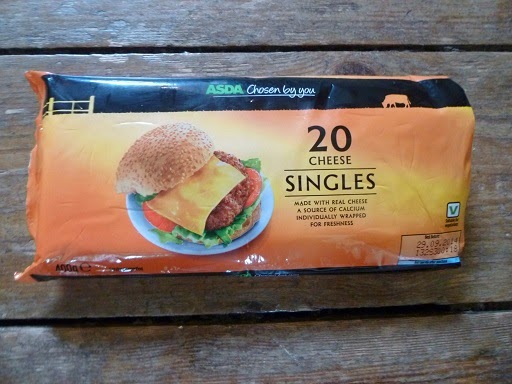 Cheese singles with more than a passing acquaintance with a cow

The man at the till couldn’t believe it either when he checked the prices, but it still came up as 50p for 400g so I triumphantly carried off actual ASDA cheese slices, rather than the Smartprice version.

This was a great relief in more ways than one, as I discovered that Smartprice cheese singles only actually contain 11% cheese and even the normal ASDA version only claims to be 60% cheese.

After yeast disappointment and cheese confusion I headed home, and decided to raid my store cupboard for the odd few additions, and deduct the relevant money from the Live Below the Line budget.

Sponsor us on our Live Below the Line challenge by donating to UNICEF here: