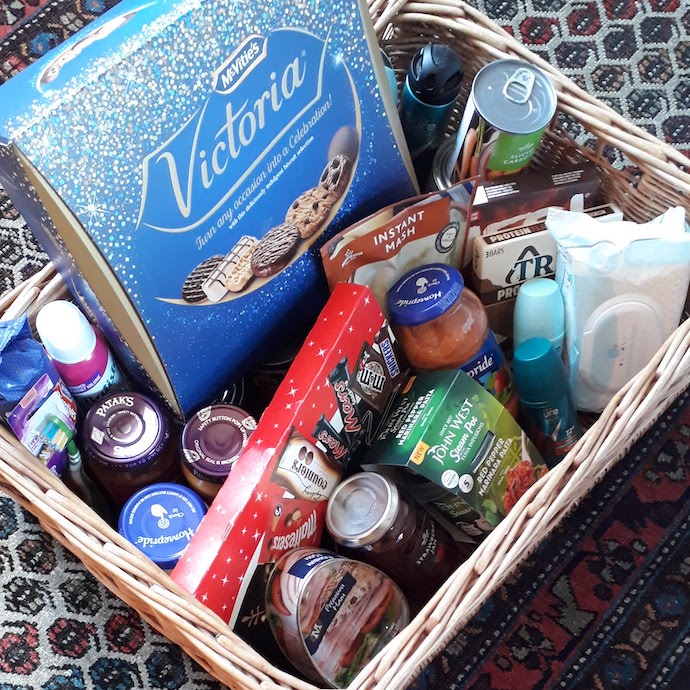 This year will be the fourth time I’ve taken part in #FoodBankAdvent, the Christmas campaign by UK Money Bloggers – and it’s more important than ever.

What is a reverse advent calendar anyway?

Normally, with an advent calendar, you open a little door each day and get something. In recent years, advent calendars seem to have exploded from paper pictures to chocolate, cheese, booze, beauty products and whatever else you fancy.

With a reverse advent calendar, you put something in, rather than taking something out.

Every day during November, I’ll be putting an item for a food bank in a box, ready to donate to a local food bank in early December. This means the food bank will have time to make up food parcels and distribute the contents before Christmas.

Why take part in #FoodBankAdvent?

I find it shocking that in one of the richest countries of the world, millions of people can’t afford to buy food. In the UK, more than 12 million people are living in poverty, of whom 4.5 million are children, according to the Trussell Trust.

It was bad enough before. This year will be even worse.

Many people have seen their jobs or self-employed earnings wiped out by Covid-19. Others have seen their income cut while on furlough. Overall, a third of families have lost income because of coronavirus.

As a result, rising demand for food banks has rocketed. More than half the people using Trussell Trust foodbanks at the start of the pandemic had never needed one before. This winter, demand for food banks is predicted to be 61% higher than record figures last year. An extra 670,000 more people in the UK are at risk of being pushed into destitution this winter, unable to afford the basics in life.

The government may have grudgingly caved in to the campaign by Marcus Rashford to extend provision of free school meals during holidays, but many people will still struggle.

No-one should go hungry, least of all at Christmas. By taking part in #FoodBankAdvent, I can help people in my local community, encourage my kids to think of others and raise awareness of food poverty.

What goes in a reverse advent calendar?

Most importantly, check what your local food bank really needs.

They might have mountains of pasta, but need the sauce to make it into meals. They could be swimming in baked beans, but need other tinned veg: peas, carrots, sweetcorn. Often they are low on more expensive items, such as jars of coffee, tinned meat or gluten-free items. Food banks may also distribute other essentials, such as toiletries, sanitary protection, baby products and even pet food.

This is my post from a couple of years back, highlighting where FIND (Families in Need) had shortages, but do check in your own area:

What does your food bank actually need?

Ever noticed the collection baskets by supermarket tills? They may include a list of items urgently needed, such as my picture above in our local Co-op. You could also check the food bank’s website or Facebook page.

What I’ve put in my reverse advent calendar so far

After talking to the people who run food banks in Hadleigh and Ipswich, I’ve changed what I donate.

I’m aware that smaller packs of for example sugar, milk and coffee can be useful for people carrying bags of food back home on foot or on the bus.

A pie in a tin, that requires cooking for half an hour in a hot oven, isn’t a great choice for someone who can’t afford to turn the oven on, or doesn’t have an oven at all. Instead, I’m adding items that doesn’t require much cooking equipment or knowhow, such as Pot Noodles, tinned stews and tinned fish.

Kids may be delighted to see familiar brands, rather than a bag of lentils that needs other ingredients and spices to turn into something edible.

Also, after my own experience on Live Below the Line and the Ration Challenge, I appreciate how much food can lift the spirits. A decent jar of jam or packet of biscuits really does make a difference.

During my first week, I’ve added some Dolmio pasta sauce, tuna, sweetcorn, teabags, coffee, jam and shampoo. I’ll be sharing more pics of my reverse advent calendar on social media, with the hashtag #FoodBankAdvent, hoping to encourage others to take part.

I’ve also asked food bank managers about festive treats. They suggested including a big box of biscuits or chocolates that a whole family could share. Best to avoid food with short dates, such as mince pies. Most food banks don’t give out alcohol, which could rule out some Christmas puddings. Sadly, a chocolate advent calendar could be disappointing, if it’s distributed late, or counts down to a miserable Christmas.

Taking part in #FoodBankAdvent during 2020

This year, lockdown means I won’t be nipping to the shops so often, making it more difficult to pick up items for my reverse advent calendar. I’ve tried to buy more in one go, which can then be added on different days.

If you’re shielding at home, consider adding items to any internet shopping order. I’ve also checked our cupboards for useful items – making sure the ‘use by’ dates extend well into 2021.

Alternatively, all food banks need cash, whether to supplement shortages or cover the cost of distribution and storage. If you’re not sure what to get, you can buy food bank gift vouchers at Morrisons, or swap Tesco Club Card points for donations to the Trussell Trust.

You could also donate directly to the Trussell Trust, your local food bank, or to the UK Money Bloggers Go Fund Me appeal, if you can spare anything.

Now – over to you. Are you doing a reverse advent calendar? Do l share in the comments, I’d love to hear.