We started Day 4 with the smell of burning pineapple syrup.

The Live Below
the Line £1 a day budget didn’t extend to sugar, so I tried to create a
sweetener for my husband’s porridge by boiling up the syrup from the tin of
pineapple.

Unfortunately I then wandered off to load the washing machine
and disentangle a toddler from a chair, as you do, and only remembered the
saucepan when it had reduced the liquid to burnt pineapple toffee.

So we ate a chilly breakfast on Day 4, with all the windows
open to get rid of the smell.

BREAKFAST: Porridge
with pineapple chunks and a cup of tea 21p

Turns out that even without the syrup, my husband actually liked
porridge when he could eat it with pineapple chunks, rather than value jam or
grated apple. Many cheers.

He liked it so much he even saved some pineapple to eat with porridge tomorrow morning, which is more than I managed to do.

Today I used up the extra rice from yesterday to make lunch
for us both, with the addition of a smidgen of onion, some garlic, 50g of
frozen carrot, 60g of the cooking bacon and a couple of eggs to make it egg
fried rice.

I tried grilling the bacon to make it crispy, but I can’t say it
made much difference to the end result. Eating egg fried rice with minimal
additions made me nostalgic for cheap backpacking holidays as a student, but Josh said his was a bit dry.

SNACK: Jam on toast and a cup of tea 4p

I gave Josh the last remaining portion of pea, bacon and cauliflower
soup from Day 2 to take to work, and he reported cheerfully that it was quite flavourful.

I had good intentions about making some soup for myself, via
the alchemy of a single carrot and a stock cube, but in the end I couldn’t be
bothered and just ate a piece of toast and jam instead. 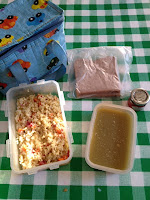 Here’s a photo to give you an idea of Josh’s packed lunches:
a box of soup, a box of fried rice, a couple of slices of bread and some jam decanted
into a small pot.

He took in a bunch of value tea bags and some of the UHT milk
at the beginning of the week.

Nothing like a comedy car lunch bag to improve your
credibility at work.

Again, Josh was hungry when he got home from work, and
delighted when there was enough bread to have an extra slice with jam.

For dinner, I cooked up a decent amount of the bacon, 150g,
with all the broccoli from the bag of frozen mixed veg (120g fact fiends) and used 225g of the spaghetti.

It tasted good even if a bit
strange to be eating spaghetti with something that didn’t have a sauce, but penne or fusilli would have been more expensive.

To donate to Unicef at Live Below the Line, the
global poverty project, click here: