In search of cutting costs and cheap curry powder, I set off
to explore the previously uncharted territory of Ridley Road Market, with
three-year-old Mr Pog* in tow.

Ridley Road Market is not part of chi chi north London. It’s not a market that sells organic anything, or vintage anything, or heritage anything (or if it does, it’s only by accident and not so over-priced). 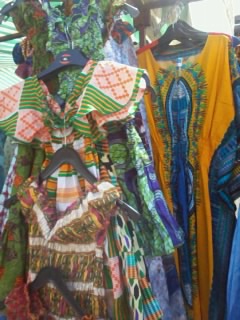 It’s full on Hackney, vibrant, loud and international and I’ve only ever stared at one end of it as we went by on the bus.

So I was quite excited, but Mr Pog less so. He had to be
bribed with Maltesers to stay in his buggy rather than disappearing at mach
speed on his scooter. This did not come out of my Live Below the Line budget.

Ridley Road Market is fabulous and I’m so glad Live Below the Line finally
inspired me to go there.

It’s a maelstrom of exotic produce and bargain fruit and veg
and multi-coloured African fabric and plastic tat and clothes you wouldn’t want
to wear near a naked flame, with butchers and bakers and fishmongers thrown
into the mix.

There are stalls selling yams and plantain, fufu flour and
manioc, £5 bags of Caribbean snapper and strong-smelling saltfish.

Outside the
halal butchers are boxes piled high with cow’s feet, pig’s ears and what looked
suspiciously like stomach lining.

There’s a 24-hour bagel bakery, a Turkish supermarket
and a shop that only sells Naan breads, cooked on a rotating metal plate in
front of you.

All the tumult made me smile and remember the days when I ventured
further afield than Norfolk for holidays.

It’s a world away from the sterility of the supermarkets.

Whoever manufactures cheap plastic bowls must have made a
killing here, offloading them to all the stalls stacked with fruit and veg sold
for a pound a bowl.

In amongst them, Mr Pog and I found one of the few stalls
selling anything at 50p a bowl, and loaded up with 6 onions and 7 carrots.

And yes, there were many stalls selling cheap spices
alongside piles of lentils and pulses, so we carried off a 100g packet of TKS
garam masala for 60p. Tweaking the shopping list to cover an extra 60p seemed
so much more feasible than raising £1.10.

We finished by nipping into the Kingsland Shopping Centre at
the end of the market, and discovered that Iceland sells 12 mixed weight eggs
for £1.25.

To top it all, scrabbling through the reduced section in the
Sainsbury’s nearby, I discovered a couple of beaten up cans of Sainsbury’s Basics
Peeled Plum Tomatoes reduced from 31p to 19p each, and a dented can of
Sainsbury’s Basics Kidney Beans down from 21p to 14p.

I think Mr Pog had no
idea why I was quite so delighted at these battered, yellow-stickered cans, and
the chance to save 31p. Reckon I need to get out more…

*I haven’t enlisted my
children in Live Below the Line because they’re too young to choose for
themselves, and I was too worried about feeding them a healthy, balanced diet
on such a low budget. And yes, I remain incredibly thankful that I have the
luxury of that choice, unlike so many, many others.

To donate to Unicef at Live Below the Line, the
global poverty project, click here:www.livebelowtheline.com/me/muchmorewithless