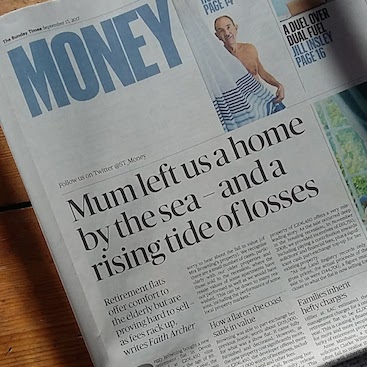 Ever imagined where you might live in later life?

I don’t mean a ‘roses round the door’ kind of chocolate box cottage, but the kind of place where you (or maybe your parents) could live independently, with just a bit of support?

I’ve been musing over the issue while writing my latest article for the Sunday Times, published today, about buying new-build retirement homes. Think sheltered housing – where you have your own flat, but there’s a communal lounge to meet up with other oldies, a warden on call if needed, alarms to call for help and other support.

(Check out the full article here)

The article focuses on a particular example, where a brand-new retirement flat is now being resold for a lot less money, and the family are still having to pay thousands of pounds a year in service charges for an empty flat.

Turns out that quite a lot of brand spanking new retirement properties do drop in value, so I talked to various experts about the reasons why. Some reasons were practical, some rather sad, and some made me think ‘huh, I see now’. So in case it’s any help to people thinking of buying somewhere similar, here’s why.

Why do new-build retirement homes (sometimes) sell for less?

First, for any new-build property, there’s a premium on being the first owner. One expert referred to it as the “new carpet, new paint” factor. People buying in a modern block like the idea of a brand new flat, rather than buying it second or third hand. It’s bit like buying a brand-new car (and I’ve written in the past about car financing and how the value of a new car plummets as soon as you drive it off the forecourt)

But then there’s an extra premium for new-build retirement properties in particular:

Joining a community at the start

Paying more to buy in a hurry

Accepting less to sell in a hurry

Strikes me that other financial issues with retirement properties arise whether they are brand new or not. Some are built with very limited parking. Most will have higher service charges than on ordinary flats – if you think about it, the service charges need to cover not just building and garden maintenance, insurance, heating and decor for communal areas, but also for example paying for that site manager and the alarm systems. Those costs don’t go away just because someone is no longer living in a flat, so yes they still have to be paid right up until the place is sold.

Some flats have hefty exit fees built in, so that when a flat is resold in future, a percentage of the price must be paid back to the developer. The justification for exit fees seems to be that the developer provides peace of mind that service charges won’t spiral, and potentially subsidises meals and care. In return, however, they want their money back afterwards, as a chunk of the selling price.

Benefits beyond the financial

I do believe that the contracts and costs for many more recent retirement properties have improved. However, it will always be worth checking the conditions about service charges, ground rent, exit fees and leases, to understand what they are now and how they will change in future.

Where the experts and developers agreed was that retirement properties have a value beyond anything purely financial. In providing support and company, they can help older people live independently for longer, without the physical and mental illnesses exacerbated by social isolation. I co-hosted a podcast with Martin Bamford from Informed Choice Radio recently, about the staggering cost of long term care fees when it’s no longer possible to live at home. If in future a retirement flat might help me live in my own place for longer, I’m all in favour – but I’ll still be checking the small print. And maybe, if I want to leave anything for my own children, I’ll be looking at renting one instead.