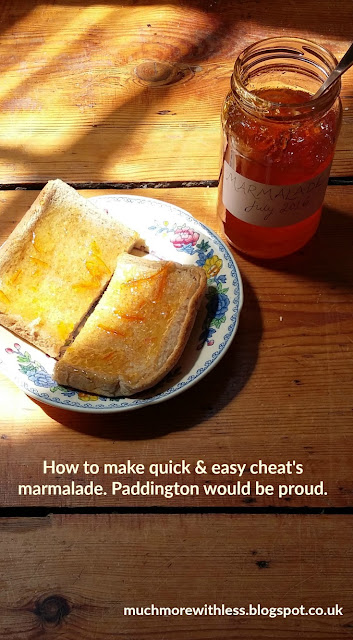 Have you ever made marmalade?

When we moved to the country, I had idyllic visions of making jam, bustling about bottling things with great big pans bubbling away on the Aga.

We’d harvest the plums from the tree in the secret garden, have family outings to go blackberrying, snap up Seville oranges and then come home and cram it into delicious jewel-bright jars.

I duly hoarded jam jars like the worrying subject of a Channel 4 documentary, and insisted on a special trip to Aldi when preserving pans and jam thermometers were on special buy.

Somewhere along the line, life intervened. The shiny new pan has spent a year stuck at the back of the shelf.

But I still had the best of intentions. My grandmother made marmalade. My mother still makes marmalade. I wanted to make marmalade too, even if I did try to gloss over memories of quite how much chopping, straining and swearing was involved.

As the Seville orange season came and went, I resigned myself to another year without attempting home-made marmalade. So when I saw a battered jar of Ma Made on the reduced shelf in the Co-op, I had to buy it.

The list of ingredients was reassuringly short – seville oranges, water, citric acid aka lemon juice and pectin, as a setting agent. My £1 purchase promised 6lbs of home-made marmalade in 30 minutes, just by adding sugar and water. I only had to follow the instructions on the label.

It took a mere two months for me to buy the sugar, use the sugar for something else, buy more sugar and finally get round to cleaning the jars and actually making the marmalade.

Here’s my report from the marmalade-making coal face.

HOW TO MAKE CHEAT’S MARMALADE

1. Do lengthy calculations to work out how many jars will be needed, based on normal jars of jam containing 454g and the tin of Ma Made promising 6lbs of marmalade. Only realise that normal jars contain roughly 1lb, so that means 6 jars, after resorting to a spreadsheet. Doh.

2. Liberate some of the massed ranks of hoarded jam jars, with a sense of relief that they are finally coming in useful. Demand your children return some of the jars filched for potion making so you can have matching lids.

3. Remember previous attempts at making cranberry conserve, and running out of sterilised jars. Add an extra one for luck.

4. Bung the jars in a hot wash in the dishwasher, lids and all.

5. Retrieve enormous jam pan from the back of the cupboard and give that a wash.

6. Battle with tin opener to opened dented tin of Ma Made. Somehow succeed in getting the contents out.

9. Add the truckload of sugar. Feel pleased that Morrisons were selling massive 2kg bags for 88p.

9. Stir in the sugar, and bring it to the boil.

11. Curse the bit of the instructions that says “stir continously” while bringing to the boil.

12. Decide intermittent stirring will be sufficient.

13. Realise that if you use an elderly Aga, and have just put an enormous pan of cold stuff on top, after already cooking two sets of noodles and two sets of stir fry, the chances of there being enough heat left to bring it to the boil any time soon are approximately nil. Curse the Aga. Pause for short day dream about modern hobs that actually, you know, heat things.

14 Realise the final of the Great British Sewing Bee is about to start. Remove mildly warm marmalade mixture from the hob, cover the pan with a tea towel, and abandon marmalade-making attempts for this evening.

16. Resume marmalade making attempts the next day. Marvel when the marmalade finally does come up to the boil.

18. Note instruction on tin to “Add a knob of butter during boiling to disperse foam”. Realise have run out of butter. Decide to ignore any foam.

19. Get excited about testing for setting for the first time (I don’t get out much). Tin says “Put half a teaspoon of marmalade onto a cold saucer and put in a cool place.”. Assume if it meant the fridge, it would say the fridge, so maybe not that cold. Compromise with putting the saucer on the back stairs, as one of the chilliest places in the house.

20. Officially: “Test after 2 minutes, by drawing a finger over the surface. If it wrinkles, setting point has been reached. If not, reboil for a few minutes. Test again.” Well, I tried the finger business after two minutes, and it seemed a little bit wrinkly, so I kept the marmalade boiling for a few more minutes, then took it off the heat and had another go.

21. Fend off child who has returned just as I am retrieving a pan of clean jars from the roasting oven, where they’ve been heating them for 10 minutes to destroy any remaining bugs. Suggest they taste the setting point sample.

22. Am informed the marmalade would benefit from a touch of lemon juice. By my six-year-old. Sigh.

23. “Leave marmalade to stand for a further 2-3 minutes, before pouring into warmed jars.” The wide mouthed metal funnel I was given years ago came in really handy here, for transferring hot marmalade from an enormous pan into the jars with minimal mess.

24. Feel relief about cleaning an extra jar – the mixture filled 7 jars rather than 6.

25. The instructions reckon that if the peel floats, stir contents of each jar. Am unsure about level of floatage. Stir anyway.

26. Put the lids on. Or parchment or film, whatever you fancy.

27. Search for the small sticky labels suitable for jam jars. Fail to find them. Resort to enormous parcel labels instead.

28. Gaze on your seven jars of marmalade with great pride.

29. Sit in the sunshine eating toast and marmalade, even if you have run out of butter. Lemon juice? Pah. I think it tastes just fine. Paddington would be proud.

Anyone else enjoy making marmalade? From scratch, or with Ma Made? Or is it just too much faff?

Keen on jams and jellies? Check out my post on making cranberry sauce for Christmas.