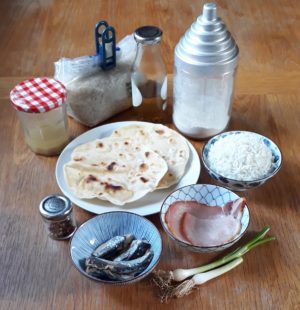 Food left for the last day

If you had to feed yourself for a week on 11 ingredients, what would you choose?

I’ve just finished the Ration Challenge, living on the same rations for a week as a Syrian refugee in a camp in Jordan and fundraising for Concern Worldwide UK.

Read out to find out which meals I managed to make!

Food on the Ration Challenge

I had just 11 ingredients to stretch over a week, based on the official ration pack plus four extras I earned from hitting fundraising targets.

When you think that three of the 11 ingredients are salt, oil and chilli flakes, that doesn’t leave much!

In practice, I had way more rice and oil than I would ever normally eat, and way less of everything else. When I first glanced at the protein on the list, I could think of 10 or so portions of food. But stretching it to 21 meals? That was tough. 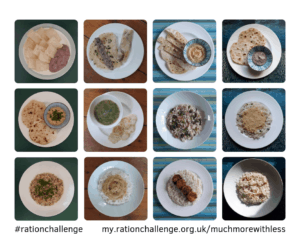 Meals on days 2 to 5 of the Ration Challenge

Meals on the Ration Challenge

My meals on the first day, as described here, were pretty grim.

Stodgy, soggy, salty rice porridge (congee), followed by rice crackers with watery lentil soup, and finished off with far too much rice and far too few kidney beans. The spring onion chopped up into the soup was a high point. 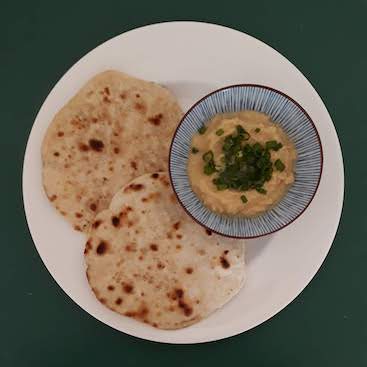 On Day 2, I buckled down to improve my meals.

I realised I wouldn’t cope well with unrelenting plain boiled rice on the official Ration Challenge meal plan. Stretching out the protein, to include a tiny amount with every meal, would make a big difference. I also like cooking, and had the time to try different things with my limited options.

So for breakfast, I sliced up leftover congee to bake as rice cakes, and ate them with mashed up kidney bean paste.

For lunch I made my first ever flatbreads to accompany watery hummus, made only from soaked chickpeas blended with oil, chilli flakes, water and a bit of spring onion.

The flatbreads were a revelation – 150g flour, mixed with water to make a dough, then kneaded and left for 10 minutes under a damp cloth. I divided the dough into 6, before rolling each portion into a super thin circle, and frying both sides in a bit of oil in a hot pan. I could have scarfed the lot, but managed to stick four in a biscuit tin for another day.

For dinner, I cracked open the tin of sardines, and fried up leftover boiled rice in some of the sardine oil. Mixed with half the sardines and half a spring onion it tasted great! 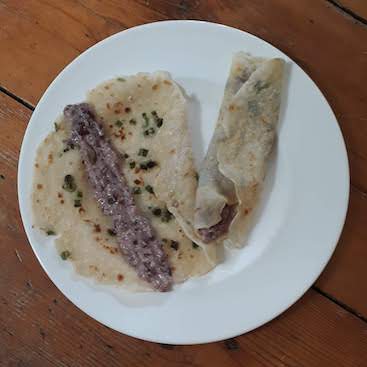 They tasted better than they look…

I found breakfast tricky on the Ration Challenge, as I didn’t have anything I’d normally eat – no cereal, milk, toast or eggs.

On day 3 I tried making crepes from flour and water batter, plus some softened chopped spring onions. They looked depressingly doughy but improved with kidney bean paste and a lot of salt.

For lunch I ate the remaining watery lentil soup with chopped spring onion. I tried using the last of the congee to make fried rice cakes again, with limited success. Suspect the oil wasn’t hot enough for the first few.

In the evening, I threw caution to the wind, and cooked up all the lentils left after making soup. I simmered them to make a basic dahl, added spring onion and chilli flakes, and divided the result into three portions. Dinner was one portion of dahl with boiled rice and a lot of salt. I mashed rice into the second portion, shaped it into two fritters, and froze them for another day. 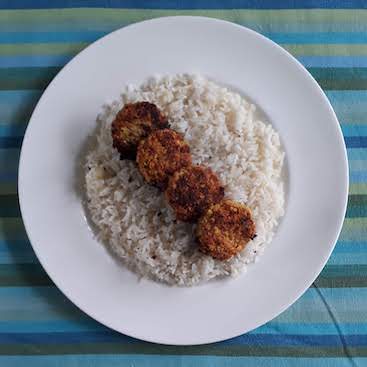 By the fourth day, I still couldn’t kick my persistent headaches. Who knows if it was the lack of protein, sugar deprivation or caffeine withdrawal. I was glad to be able to chuck a couple of flatbreads in the toaster, to eat with some dahl from the night before.

For lunch, I fried boiled rice left over from dinner, and stirred through half the remaining kidney beans. Tasted about as good as you’d expect.

I tried making rice milk, as I couldn’t face black tea but failed dismally. Despite soaking rice for hours and then whizzing it up with clean water in a food processor, I just ended up with water that tasted of boiled rice and lots of shards of rice.

I’d been looking forward to my evening meal, as I attempted to make falafel from the last of the chickpeas. The food processor was pressed into action again, to combine soaked chickpeas with a spoonful of flour and a bit of spring onion. I divided the result into four flattened balls, and fried them in chilli oil.

I’m sure they would taste better with hoummous, salads and a whole array of Syrian or Turkish side dishes. But served on yet more boiled rice, they were just a bit dry. 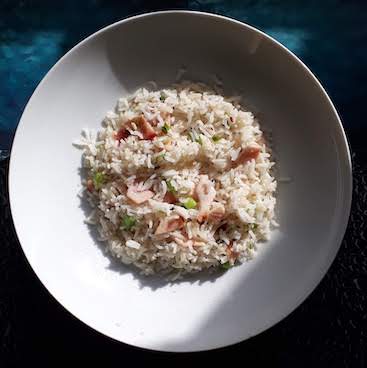 On Day 5, I made the mistake of heading out to the shops straight after the school run, rather than returning for breakfast. By the time I got back at 11.30am, my legs were wobbly and I felt pretty spaced out. The Ration Challenge isn’t exactly big on convenience food, so I was glad to grab the last couple of flatbreads and the last of the kidney bean paste.

For lunch, I’d got into the routine of frying leftover rice from the night before, with a bit of spring onion and a small portion of dahl.

The high point on Day 5 was raising the £400 in sponsorship to earn 120g protein. I havered between choosing a couple of eggs and four small rashers of bacon. In the end I went for bacon, figuring it would stretch across more meals. So dinner on Day 5 ended with rice and bacon fried in a chilli oil. 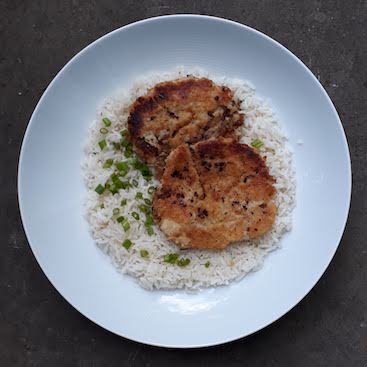 Floppy lentil fritters. Made with rice, served on rice.

Day 6 was a weird day. I was impatient to get through the Ration Challenge, and get past the headaches and the foggy feeling making it difficult to concentrate. Everything seemed to take longer, as I was tired and lacking in energy. Breakfast had to wait, while I eked out 100g flour to make another four flatbreads, and ate two with the last of the dahl.

For lunch, I boiled yet more rice, and stirred through the last of the kidney beans and some tiny strips of bacon.

Dinner starred the defrosted lentil fritters, floppy despite frying them in chilli oil, with yet more fried rice. I’ve never fried so much food in so much oil before. My husband has got used to flinging open the windows, to get rid of the oily smell. 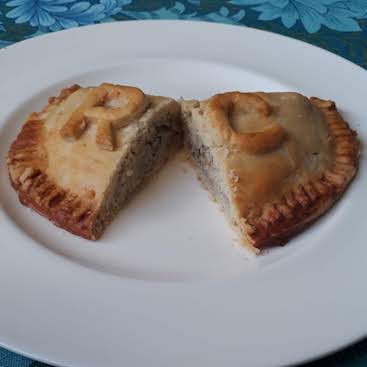 I felt giddy on day 7 just because it was the last day of the Ration Challenge! Scraping together all the food I had left, I tried to work out what would make any meals.

I’d thought of making more crepes with spring onions for breakfast, but had other plans for both flour and spring onions. In the end, I made a single small spring onion crepe with 25g flour, fought my son off the last two flatbreads, and mushed together a bit of sardine with oil, rice and water to eat with them.

Hitting £600 in sponsorship meant I could claim ‘330ml hot or cold drink’ as milk – and make my first cup of tea in a week. But the longed-for cup of tea just gave the jitters, after the break from caffeine.

For lunch, I fried the last of the bacon with (you’ve guessed it) more rice.

For dinner, I’d originally planned a rerun of the ‘sardine, spring onion and fried rice’ combo from Day 2.

In the end, I decided to put the sardine fried rice inside a pasty, using pastry made with oil instead of my normal butter and lard. The pastry turned out well, if very crumbly, but the sardine and rice filling was super dry. Fear it photographed better than it tasted!

I also threw caution to the wind and chucked 30g rice and 300ml milk in a dish,  baked on a low heat to make rice pudding. Hey, I was only missing little extras like sugar, cream, milk powder, jam and nutmeg…

But the time I’d eaten the leftover rice and sardines, and waded through the pasty, I couldn’t face more than a teaspoon of savoury rice pudding. I offered my mother and a husband a taste. As reviewers, they marked it down as  ‘not disgusting’ and ‘passable’. Always good to know I have their unstinting support 🙂 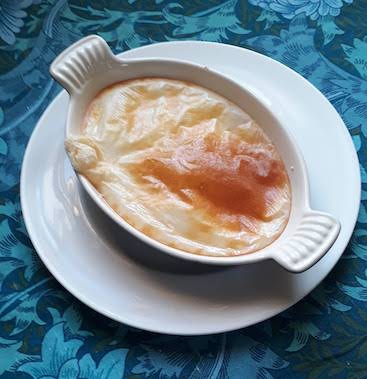 I’ve never spent so long cooking with so few ingredients, trying to stretch small amounts of protein over multiple meals.

The Ration Challenge has really rammed home how small things can make a massive difference. The sprinkling of spring onions, or bit of bacon, really lifted some meals. Meanwhile the lack of a spoonful of sugar that meant I couldn’t face rice pudding. The limited ingredients in a ration pack left me longing for colour and crunch. I depended on salt and oil to stomach bland flour and rice. I only had to last for a week – unlike so many refugees for whom this is the daily reality for years.

Now – over to you. Any inspired ideas on what I could have made with the ingredients available? Do share in the comments, I’d love to hear!

Conditions in the refugee camps are even worse during coronavirus, so I’m doing the Ration Challenge again from 13 to 19 September.

If you might consider sponsoring me, here’s my fundraising page for Concern Worldwide UK. Anything you can spare would help  to provide food, education and medicine for refugees: https://my.rationchallenge.org.uk/faith-archer

Check out my other posts about the Ration Challenge 2019:

First day of the Ration Challenge