This is a collaborative post with the Society of London Theatre 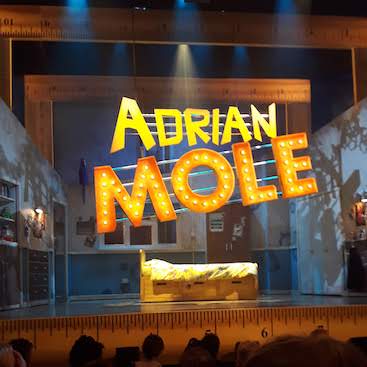 Last week I took the children to London for a brilliant day out to see ‘The Secret Diary of Adrian Mole Aged 13 and 3/4 – The Musical’.

We love going to the London shows – but don’t always love the ticket prices quite so much!

But right now there’s the chance to bag family theatre trips for less, and snap up free tickets for children during Kids Week in August. 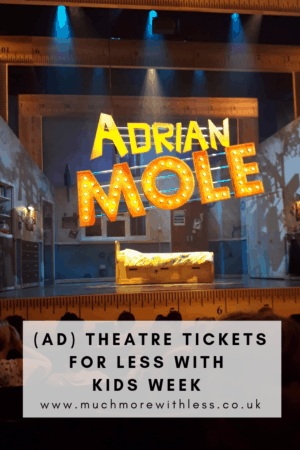 Kids Week includes a whole range of musicals, plays, comedies and children’s shows, with performances suitable for toddlers right through teens. You can even book in for special activities, including Q&As, dance workshops and behind-the-scenes tours. Check out everything on offer here.

I’m a big fan of Kids Week. The free and half price children’s tickets mean we can either get cheap seats for next to nothing, or benefit from better seats than we’d normally buy.

One of the first times my children went to the theatre was during Kids Week in 2012, when I took my then four-year-old and two-year-old to see ‘The Tiger Who Came to Tea’.

We’ve also bought tickets during  the Official London Theatre New Year Sale for family trips to Wicked and School of Rock. Tickets go on sale in early December for performances in January and early February, at £10, £20, £30 or £40 depending on seats and show, so it’s great for Christmas presents! I signed up for the Official London Theatre newsletter, so I get tipped off when tickets go on sale for both Kids Week and the January sale. 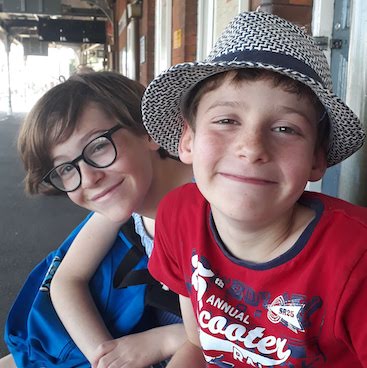 Off to the station

Make a day out of a theatre trip

We decided to make a day out of our trip to the theatre. We chose a matinee at 2.30pm, partly so my son wouldn’t fall asleep during an evening performance. It also meant we could get to London from Suffolk in time for lunch, and still get the chance to explore afterwards.

Luckily, during the school holidays Greater Anglia run an offer when children can travel by train for £1 each way. I also get a third off off peak tickets with my Network Railcard, so it only cost just over £30 to get the three of us to London and back. Children under 11 also travel free by tube.

Adrian Mole – The Musical is showing at The Ambassadors Theatre, in the heart of Covent Garden and right near Chinatown, so there’s loads to see nearby. 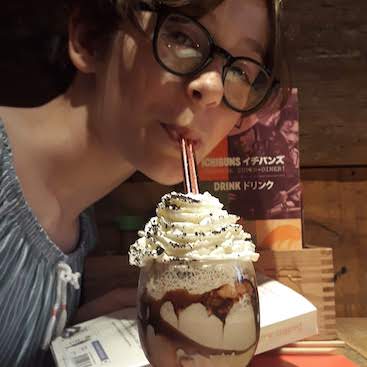 When one child wants a burger and shake…

We decided to eat out for a special treat. With one child wanting a burger, and the other wanting to try sushi, we headed to the Japanese diner Ichibuns on Wardour Street. The kids menu is a good deal at £6.50 for a mini cheese burger, fries, milkshake (or other drink) and mochi ball – that’s the same price as an ordinary Ichi Shake alone. 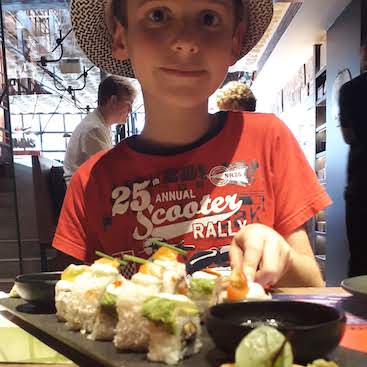 …and the other child wants sushi!

There are loads of other family-friendly restaurants nearby, and my children love exploring Chinatown. It’s so colourful with the gates and lanterns, and they’re excited to spot unusual fruit & veg, stare at the cakes, ducks and dim sum on display, and eye up different drinks and snacks in the shops. 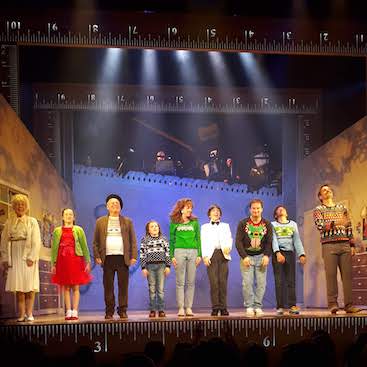 Fab cast taking a bow after ‘Adrian Mole – The Musical’

Trip to ‘Adrian Mole – The Musical’

I’m going to ‘fess up to a soft spot for Adrian Mole.

I come from Leicester, home of the author, Sue Townsend. My mum is mates with Caroline Holden, who did the original illustrations, and I loved reading the book when it first came out. So when my 11-year-old picked Adrian Mole from the list of Kids Week productions, I was raring to go.

The theatre version was huge fun, as a full on singing, dancing musical, which I’m glad to say started at the Curve theatre in Leicester.

The production is firmly rooted in the 1980s, complete with Adam Ant poster on the wall, pale denim, royal wedding and deeply boppers. But Adrian’s teen agonies are timeless – struggles with teen spots, first love, malevolent headmaster and the disintegration of his parent’s marriage. The performance managed to be laugh out loud funny while still tugging at the heart strings.

The child actors were amazing – with special shout outs to Pandora and her weaponised pony tail and the pin-sized menace from bully Barry Kent. My kids squirmed through Doreen Slater’s vamp dance and the right-on Nativity play, and loved the school disco and classroom scenes. I reckon it’s a great one for children aged 10 and over.

Check out the website for more info and video clips from The Secret Diary of Adrian Mole Aged 13 and 3/4 – The Musical.

After the musical – with compulsory interval ice cream – we made a pilgrimage to the Forbidden Planet mega store along Shaftesbury Avenue. We also explored different shops and stalls around Seven Dials, before heading home. Frugal style, I’d lugged around sandwiches, snacks and drinks to eat on the train back. 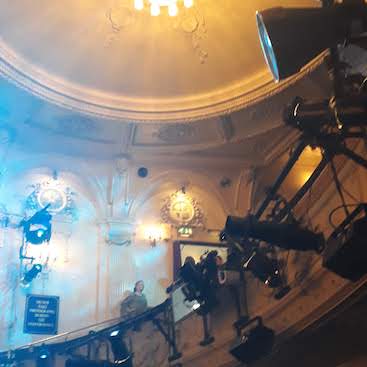 If you’re keen to snap up free theatre tickets, head straight over to the Kids Week section at the Official London Theatre website.

Tickets for Kids Week went on sale at 10am on June 11 (so mark your calendar for early June next year). This means some performances may have sold out or have limited availability.

However, I’ve checked with Official London Theatre, and there’s still the chance to nab free tickets for children. These shows still have good availability, with choices perfect for a wide range of ages:

Now – over to you. What was your favourite theatre trip as a child? What are you going to see during Kids Week? Do share in the comments, I’d love to hear!

DISCLOSURE: We were given free tickets to ‘Adrian Mole – The Musical’ in exchange for this post. However, all views are my own.