Last year when I was doing Live Below the Line I went to a cookery demonstration.  Boy was that bad timing.

Everyone else got to tuck in to fabulous food while I was
trying to hide my cheap and cheerful cheese slice sandwiches. However hard you
try, feeding yourself on £1 a day for 5 days does not stretch to roast lamb,
four cheese quiche and chocolate, almond and pear crumble.

Anyway, the lady doing the demo recommended a lemon and ginger cheesecake recipe by Mary Berry as both incredibly easy and very
delicious.

Now I don’t normally make many puddings. I love baking, but
can’t be faffed with fancy puddings and rely on fruit, yogurt and ice cream
instead.

But I tend to like recipes by St Mary of Berry as simple,
practical and unpretentious, with great advice on what can be prepared ahead.

So I decided to give the cheesecake a whirl for a family
birthday lunch. The birthday celebrations were the same day as the amazing
Hadleigh Show,  which meant I was keen to do as much cooking beforehand as possible, so I could
spend more time reliving the 1950s at a country fair.

I doubled the ingredients for the cheesecake base, as I was
using a bigger 23cm tin rather than the 20cm tin in the recipe.

I also gave the ingredients a budget spin. Mary Berry’s
recipe doesn’t actually specify Sainsbury’s Basics lemon curd, although I’m
sure this is just an oversight…

Juice of one small lemon (3 for 75p from Aldi. You could
also use a decent shot of lemon juice from a bottle or squeezy plastic lemon,
which would be cheaper still)

100g raspberries or other berries to decorate (350g frozen
raspberries for £2.20 from Sainsbury’s)

This serves 8 to
12 people depending on enthusiasm for cheesecake and greed, so around 30p to
45p a head.

I grease the bottom and sides of the tin, then put the greaseproof paper in, then grease that. I’m sure at least part of this is overkill but I really, really didn’t want the finished cheesecake to get stuck.

Weigh out your ginger biscuits. I only allowed for part of a packet when costing the recipe, but who am I kidding? With two children and a husband loose in the kitchen, once the packet is open, none of those ginger snaps are going to escape alive.

Bung the biscuits into a plastic bag, then bash away with a rolling pin until they are entirely crushed. There may well be a way of doing this with a food processor, but it won’t be anywhere near so much fun.

Top tip: use a reasonably thick plastic bag because otherwise the ginger snaps will make a break for freedom all over your worktop.

Melt the butter in a saucepan, add the biscuit crumbs and mix it all together. Then empty the mix into the bottom of your tin and try and make it vaguely level.

If you’re using the juice from a lemon, I recommend grating the zest (skin) first, so you can use the zest to add lemon flavour to other recipes.

Put the mascarpone, lemon curd and lemon juice into a mixing bowl and stir it round until it is all smooth.

Empty the mascarpone mix onto the biscuit base and spread it out, trying to make it smooth and flat. Then cover the tin with cling film and leave it in the fridge to set. Mary Berry suggests leaving it for between 4 hours and 24 hours to firm up. I left it overnight.

The next morning, I used a knife to slice round the edge, to seprate the cheesecake from the sides of the tin. 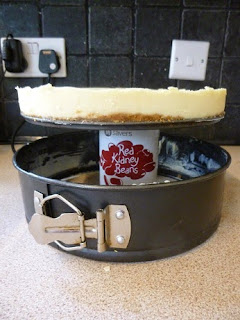 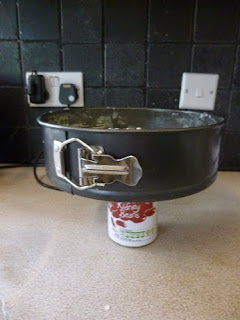 To get the cheesecake out of the tin, start by balancing it on top of any random tin from your cupboard. Release the buckle carefully, and then you can drop the sides of the tin down onto the worktop, leaving the metal base and cheesecake behind.

Mary Berry blithely says “remove the cheesecake from the tin, peel off the baking parchment and arrange on a platter”.

I left some frozen raspberries on a plate to defrost, and only put them on top of the cheesecake just before serving, so they wouldn’t go all soggy and stain the top. If the raspberries do leak some juice, try tipping the cheesecake one way and the other, so the juice covers the top and it looks slightly more like you did it on purpose.

I whisked the cheesecake through for people to eat before I thought about taking a photo of the finished product, but it went down very well with children and grandparents alike.

We polished off about three quarters of a cheesecake between six, and the photos shows what was left (but not for long).

The Live Below the Line campaign continues until 30 June, if you might consider supporting my efforts to feed myself on £1 a day for 5 days from 26 to 30 April by donating to Unicef, the world’s leading organisation for children.
This is the link to my fundraising page: https://www.livebelowtheline.com/me/muchmorewithless