BREAKFAST: Porridge and grated apple with a cup of tea 21p

Day 3 started with our first fruit during Live Below the Line – three cheers for one apple between two. I quite often eat porridge topped with
grated apple, although I’d normally go wild and have a whole apple all to
myself.

Given his dislike of porridge mixed with value jam, my husband was
willing to give it a whirl, but found the apple/porridge combo disappointing
compared to his usual additions of sugar or golden syrup. Waste of a good apple,
apparently. 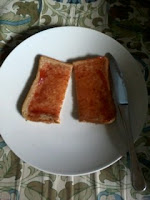 I had a headache this morning. No idea whether related to Live Below the Line or not (although I can say with absolute certainty it wasn’t a hangover…), but
I didn’t feel great even after taking a paracetamol.

I threw caution to the
winds and ate a slice of bread and jam mid-morning, in the hope it would help,
and avoided further cups of value tea.

Lunch and the soup today were made from odds and ends of
ingredients, scavenged from other recipes.  I’ve had to spend much more time than normal planning
what we’d eat when Living Below the Line, so I could eke out the ingredients rather
than face a mound of plain rice.

The starring role this lunchtime went to the 20p M Savers
tin of pineapple in syrup from Morrisons.

In the morning I’d cooked 200g of rice to cover four
portions, adding a stock cube to the water for some extra flavour.

Then I fried up the bits and pieces – a quarter of an onion,
a clove of garlic, 50g of the cooking bacon, 100g of the frozen cauliflower and
carrot chunks from the bag of mixed veg and a token 60g of the pineapple. I
chucked half the rice into the pan, along with some of the syrup from the
tinned pineapple, and heated it through. Ta dah: sweet and sour rice for two
people.

I’m not convinced it was my most successful Live Below the Line meal so
far, but my husband liked it as a packed lunch.

SNACK: Curried bean and tomato soup and a slice of bread 22p

Again, this soup for two was created from odds and ends deducted
from other meals.

I held back 50g of the chickpeas from Monday’s curry, 40g of
the kidney beans from the bean burgers and 50g from each of the tins of
tomatoes, stacking the fridge with tiny plastic boxes.

To make the soup itself I softened half an onion
(eking out the original six as far as possible) with a clove of garlic, before
adding the beans, chickpeas and tomatoes along with veg stock, some garam
masala and yet more of the frozen carrot and cauliflower.

I even liked the end result: interesting to eat and
definitely tasted of something.

DINNER: Mushroom and potato fritatta with grated carrot and
a slice of bread 40p

My husband and I were both pretty hungry this evening, and ate straight
after the children went to bed. Luckily fritatta is pretty quick to cook.

This evening’s meal used up the remainder of the tinned
potatoes from Monday’s curry, with a small amount of the mushrooms squirrelled
away from the big pack we started with.

In attempt to make the potatoes taste less tinned, I cut up
some of the fat from the cooking bacon and used that to fry some garlic and
half an onion along with the potatoes.

In an extravagant gesture I used five of our 12 eggs in this
single dish, and made sure the top was cooked by sliding the frying pan under
the grill.

We ate it with a slice of dry toast each, and the nearest we’ve
come to salad all week: a single carrot, grated, and shared between us.

I
really liked the frittata, even if I’d rather have eaten it with a whole big
salad. My husband thought it was fine, but tasted a bit strongly of onion. Think he
was missing the cheese and ham I’d normally chuck in.

To donate to Unicef at Live Below the Line, the global poverty project, click here: